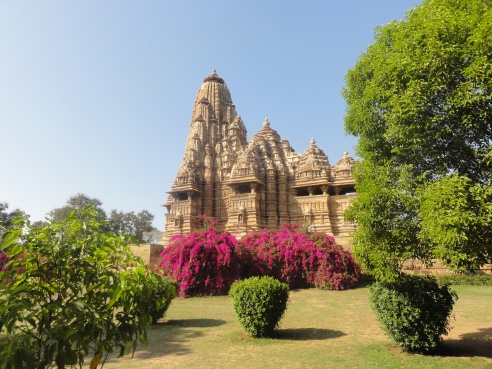 Once again we arrive early in the morning for a quick one-day-and-one-night stopover in Khajuraho. We came here mainly because we couldn’t actually get a train straight to Agra from Varanasi, as planned, due to it being full, so this was plan B. It was also exciting to get to see the famous Group of Monuments, which are supposed to be one of the seven wonders of India.

When we arrived at our pre-booked accommodation (Sri Krishna Jungle Resort, costing 900 Rs per room, per night), we were quite happy with how lovely it was. It was, admittedly, a little pricey, but we just haven’t yet had a train arrive at a decent time where we would be happy to stroll around and look for cheaper. Although the hotel was totally unfinished, the room we were located in, was amazing. Brand new. New, big, double, unslept-in bed, brand new large bathroom (tiled), the shower was a little drizzly with low pressure, but still hot, and nice large windows which, when the hotel is finished, will have a beautiful view of the complex. It was lovely, though once again, we were the only guests.

Enjoying the weather, and the beautiful, surrounding green area, we took a nice stroll to the town centre. Being a very small town, this only took 5 minutes – and that was supposed to be “far”. Khajuraho is a stunning, sleepy little town with very little happening apart from the Group of Monuments, but definitely worth a visit. We had lunch at a restaurant called Raj, as recommended by Lonely Planet, which was right opposite the temples. The food was amazing, a little pricey, but great all the same.

When we had finished and walked across the road to the Group of Monuments, Brendan decided he wanted us to get an Audio guide with two headphones. So we did. Thus, it took three and a half hours to get around the whole thing, and the sun was beginning to set by the time we left. However, it was beautiful, and really amazing to see. Famous for the erotic sculptures, these temples were built over the course of 200 years. It is thought that there were originally 80 of the Hindu temples, though only 25 now still exist. They are grouped into three different locations: western, eastern and southern. We, however, only visited the Western group.

When we finally finished looking at the final temple, ours brains were pretty fried with temple viewings, so we went to the café across the road, for some beers and to watch the sunset behind the temples. Sadly, the tree obstructed our view of the sun itself, though the sky behind it was stunning. Failing to see the light and sound show, we did stumble across an art exhibition, which was fun.

The next day, surprise surprise, we were up for an early day-train to Agra, for a necessary Taj Mahal visit!