Agra – Home of the Taj Mahal

I’m not quite sure what I expected Agra to be like, but I wouldn’t have expected this. My first impression on the city was that it was small, crowded, over-priced, a little ugly… I think because it hosts one of the seven wonders of the world, I guess I expected it to be a little more built up and developed. A big annoyance was being harassed constantly by rickshaw drivers, and restaurant owners, but it’s just a case of changing our mind-set and opening our mind. This is just the way it is.

We arrived at our pre-booked accommodation (Sai Palace – 800Rs per night), in the early evening. Rooms were basic, but fine, but definitely not clean, especially the toilet seat… The first thing we did when we dumped our bags down, was walk around the town to suss it all out, and figure out where we need to go tomorrow for the Taj Mahal, and we found out that we were actually very close to the South gate, although all gates are within walking distance, as it is such a small “city”.

Before heading to bed, we checked out a couple of restaurants. The majority of them offer a rooftop view of the Taj Mahal, and most also say that they are “recommended by Lonely Planet”.  The first restaurant we went to, we started out with a fairly average samosa and banana lassi, and moved on for a main course elsewhere.

Waking up to see the sunrise at the Taj Mahal

So, early we rose, bright eyed and bushy-tailed at 6am for the sunrise at the Taj, which we were told occurred at 6.30am. While we queued to get our tickets, the sky was getting significantly lighter and at 6.45 we were still standing at the gate waiting for it to open.

Why the sunrise was an anti-climax 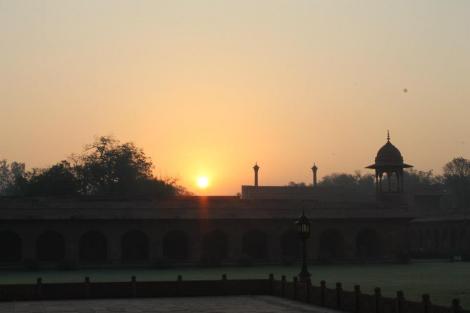 By the time we were allowed inside the grounds, the sky was already light, and it was evident seeing where the sun was coming up behind the trees, completely away from the Taj Mahal, that neither the sunrise nor sunset would be significant to see here. I think that if we had been allowed through the main gates while it was still dark, at least the silhouette against the deep blue sky as it gradually became lighter, would have been awesome to see. Nevertheless, the early morning is without a doubt the best time to visit – the temperature is nice, and it wasn’t overly crowded. Brendan got excited by the fact that Merv Hughes, the cricket player, was there with his cricket tour group, though he was too shy to have his photo taken with him! 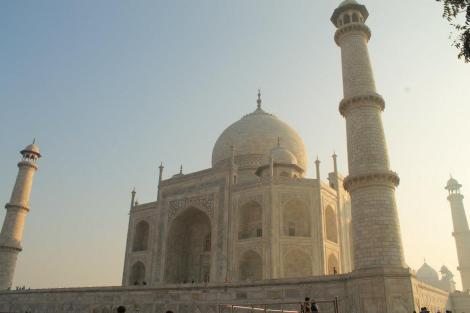 Noone can deny that the Taj Mahal is an exceptional building, which everyone should visit at least once in their lives! Built in the early 1600s, made of white marble inlaid with several precious and semi-precious stones, it has, with help, retained is majestical appearance and is now considered one of the Seven Wonders of the World. This incredible mausoleum was built by the Mughal Emperor at that time – Shah Jahan – in memory of his third wife, who died giving birth to his 14th child. (Wow!). When Shah Jahan died, his son who had overthrown him, buried him in the mausoleum next to his wife. As well as this, Shah Jahan’s other wives were also buried in the complex. 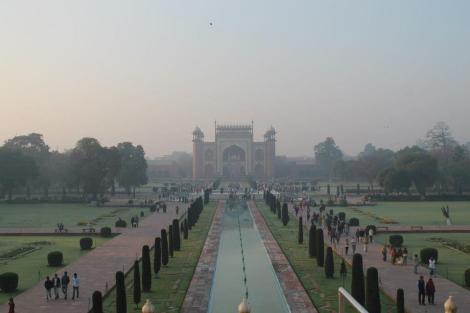 Which Days To Visit & Ticket Prices

Millions of tourists visit the Taj Mahal every year, and it should be noted that the difference in ticket price for a foreiner is significantly higher (750 Rupess) than that of an Indian tourist (around 100). This seems to annoy many tourists, but to me I think it makes sense. If Indians had to pay the same price as us, many would not be able to afford to visit such a famous and significant monument in their own country, and 750 Rs isn’t exactly much for us foreigners… if we can’t afford $11 USD to see one of the most famous landmarks in the world, then maybe we can’t afford to travel at all!!

It is open to visit Monday to Thursday from 6 a.m. to 7 p.m, and is only open between 12pm and 2pm for prayers at the mosque on Fridays.

The Taj Mahal is truly awe-inspiring and a little difficult to leave. After spending several hours walking round, taking photos, we headed to Agra Fort, another incredible ancient monument -in which the emperor at the time, Shah Jahan is said to have been imprisoned when his son took over.

Other Places We Visited In Agra 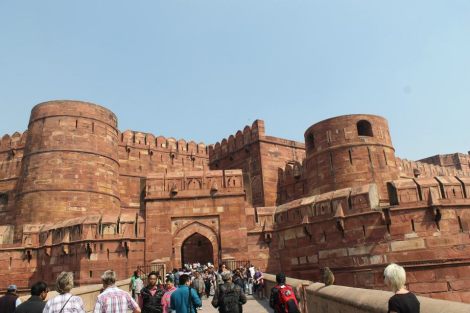 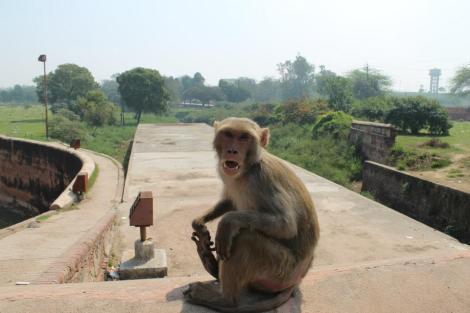 Almost as impressive as the Taj Mahal itself, covering 90 acres of land, this fort has an excellent view of the Taj and its beautiful surrounding area.

We spent a few hours walking around before heading back to our guesthouse.

Because we were booking our train for the following evening, we just missed the sunset, but we sat up on our hostel’s rooftop with a coffee and enjoyed the view nevertheless. 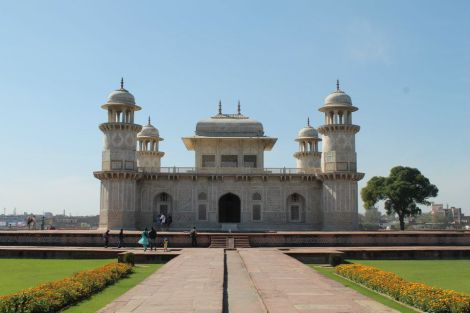 The following day, we visited the “Baby Taj”, which is quite a lot further away, in a different part of town. This cost 150 Rupees only, and was definitely worth the visit! 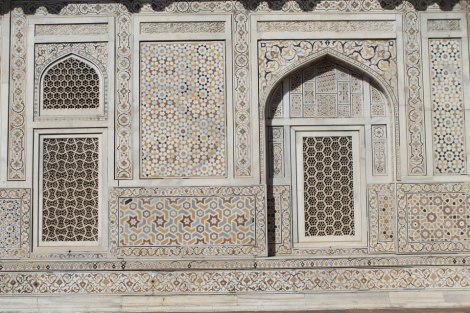 Often regarded as a draft for the Taj Mahal, it bears a likely resemblance..

Being located along the bank of the Yamuna River, it offers stunning views, where you can sit down and ponder for however long you like.

We sat on the grass outside the main monument, and enjoyed some rays of sunshine, enjoying the tranquility of the place.

Baby Taj, the tomb of I’timad-ud-Daulah, was so small we were able to see it and stay for an hour and a half only, before heading back to our rickshaw driver who had waited for us outside.

An exceptional testimony to the Mughal Empire in Agra is the Fatehpur Sikri. Also called the ‘City of Victory’, it comprises of a series of palaces, mosques and public buildings.

Fatehpur Sikri was originally built by the grandfather of Shah Jahan (the one who built the Taj Mahal). It was built as the new capital of his kingdom to replace Agra, but soon after it was finished a war broke out and the King had to retreat further North to a more strategic location. Another  incredible structure, the main gate towers at over 100 feet tall!

When we returned home, we prepared ourselves for our 24 hour train journey to Hyderabad that evening. 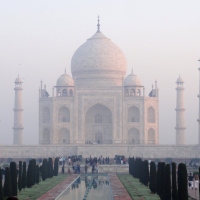