Beautiful Chiang Mai AKA “The Rose of the North” lies in Northern Thailand among the hills of the Himalayan Mountains. The breathtaking scenery comprises of striking mountains and lush green countryside. With clean air and a significantly smaller population than Bangkok, Chiang Mai is literally a breath of fresh air. 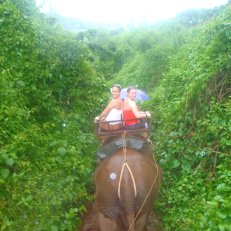 Chiang Mai has been able to keep its wonderful charm as it was barely accessible to outsiders until only 100 years ago, though the increase in tourists and expats in recent years has encouraged the development of Chiang Mai as a tourist destination. When we arrived at the train station in the morning, we were welcomed by rain and pushy hostel promoters. We agreed to stay in SK House II which cost less than £5 a night. The room was a four-bed but they threw two extra mattresses on the floor for us. This guest house also had a balcony, pool and super-cool fish tank in the lobby. Breakfast is served downstairs in a lovely lobby, though the food itself is pretty average and unsatisfying.

One of the main tourist attractions in Chiang Mai is the Tiger Kingdom, where you can have photos taken with heavily sedated tigers of various size. Of course, the staff all deny that they are sedated, but how else would you be able to stroke a full-grown adult tiger without being eaten?

The famous night market on Chang Khlan Road also attracts a high number of tourists and is one of the liveliest areas in the city. Street stalls are over spilling with a whole array of handmade jewellery, bags, shoes, Thai and hilltribe handicrafts, clothes, artwork, DVDs and much more. You name it, you can find it here. As well as these street stalls, there are dozens of cafes, restaurants and bars.

If you want to visit an authentic long neck tribe village, do not go to Karen Village. It’s a rip off. There is nothing enchanting or traditional about this “village”. To me, it is merely a small area near the forest, where wooden shacks have been put up, in which women are either hand weaving the same fabrics as each other, or texting on their mobile phones. Tourists are then supposed to walk around ogling them while the men watch TV together in the shack at the entrance stay together in their own hut. For a ten minute walk around we found ourselves paying £10 entry. The scarves were overpriced and could have been purchased for half the price in one of the many markets located around Chiang Mai.

Feeling a little disappointed at being ripped off with this “long neck tribal village”, we decided to use our paid-for taxi driver to our full advantage., which was a perfect opportunity to visit a couple of hospitals to get our friend some extra malaria tablets. While Heather and Rosie endured the experience of sitting on blood-stained bedding at the Maharaj Hospital, our driver took the rest of us to a beautiful temple nearby.

It’s astounding to think that there are more than 300 temples in and around the city of Chiang Mai , all of which reveal strong blends of cultural influences from various parts of Asia including Burma and Sri Lanka. Unfortunately many temples, not only in Chiang Mai but in much of Southeast Asia, are often overrun with tourists, and many require you to cover your shoulders and legs, and to take off your shoes. Foolishly we had forgotten to take some modest clothing, so we were given long brown robes to wear at this Buddhist temple. Mine was slightly tight and I found myself getting in trouble by the monk for showing a bit of leg. When we met Rosie and Heather, it was, er… reassuring to hear that the doctor had given her a different medication, and went against the medical book’s advice regarding the dosage.

There are many amazing places to eat in Chiang Mai, and The Riverside restaurant is no exception. Hugely popular with tourists and locals it had to be split it into two different buildings; one on the river, and one with a waterfall feature outside. Due to the excessive number of bites we have endured so far, we thought it best not to sit by the river tonight.

The nightlife in Chiang Mai consists of numerous bars, discos, live music venues and karaoke bars. These all play a wide variety of music, ranging from dance music to reggae. On our final evening in Chiang Mai, we stumbled across a lively indoor courtyard full of bars, with a ladyboy show, and a Thai Boxing match in the middle. As we sat down and glanced around we noticed that the majority of people here were either ladyboys, young Thai women, or large, balding Western men. After another couple of drinks with the girls, we made our way home, past Red Light District, which was an interesting experience… 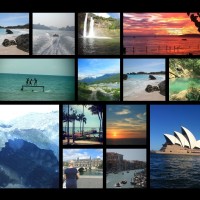